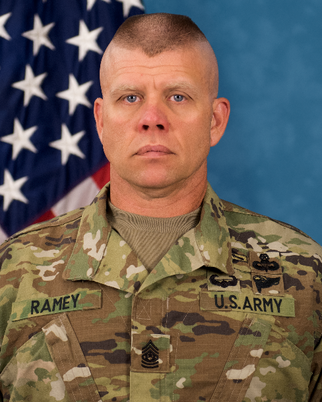 ASSIGNMENT HIGHLIGHTS
CSM Ramey enlisted into the Virginia Army National Guard in June of 1989 as a Combat Engineer, where he served as a 12B for 3 years. Upon graduation from College he transferred to the active component. In May of 1992 he was assigned to the 82nd Airborne Division, in Alpha company 2-505 Parachute Infantry Regiment, (PIR) of the 3rd brigade. While assigned to Aco he served as rifleman, machine gunner, RTO, team leader and squad leader. In May of 1996 CSM Ramey reported to Fort Richardson AK where he again served a squad leader in Charlie Company 1st BN 501st PIR Fort Richardson Alaska. In 1997 while serving as Squad Leader he attended Ranger School, then in June 1999 he was assigned as a Ranger instructor with the 5th Ranger Training BN, Dahlonega Georgia, Mountain Phase.
CSM Ramey spent 4 years in the 5th RTB as a Ranger instructor and operations NCO. In June of 2003 he received orders to once again serve in Alaska in the 501st in Fort Richardson, Alaska and was assigned to Alpha Co. as the 3rd platoon, platoon sergeant. In October 2003 he and his platoon deployed to FOB Salerno, Afghanistan, where they spent the next few months in support of Operation Enduring Freedom III/IV.  While deployed he also served as the platoon leader for the last 4 months of the deployment. CSM Ramey terminated his service to Active Component in March of 2005 and enlisted into the Alaska Army National Guard where he served as a Basic Non Commissioned Officer Course instructor. In May 2007 he moved to the G3 operations and was promoted to Master Sergeant. In 2009 while serving as the operations NCO he was selected to establish the University of Alaska ROTC program as the NCOIC.  CSM Ramey was then reassigned to the AK G3 as the OPS SGM and was promoted to Sergeant Major in December 2013. CSM Ramey’s final assignment within the Alaska Army National Guard was Command Sergeant Major, 1st Battalion 297th Infantry Regiment serving in that position from November 2015 to March 2017. He retired in August 2017.
Awards and Decorations
CSM Ramey currently holds several awards and decorations to include; Bronze Star Medal, Meritorious Service Medal with 2 OLC, the Army Commendation Medal with 4 OLC, Army Achievement Medal with 3 OLC, Good Conduct Medal (8th award), National Defense Service Medal, Global War on Terrorism Afghanistan Medal, Global War on Terrorism Service Medal, Humanitarian Service Medal, Non-Commissioned Officers Development Ribbon with numeral 5, Army Service Ribbon, and the Overseas Service Ribbon with numeral 2. CSM Ramey also earned the Ranger Tab, Sapper Tab, Master Parachutist Badge, Air Assault Badge, Pathfinder Badge. Combat Infantryman’s Badge, and Expert Infantryman’s Badge. And most recently was inducted into the Order of St Maurice
CSM Ramey resides in Eagle River Alaska with his wife Kelly, and two dogs Lana and Kenai. His son, 1LT Donald James Ramey, currently serves in the Army as a Medical Service Officer.