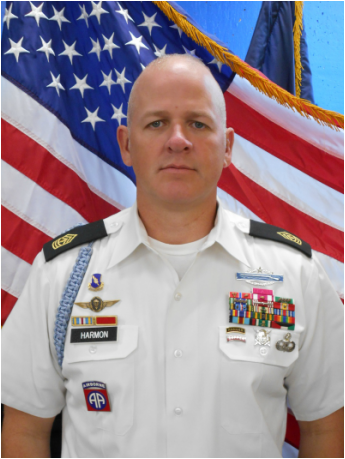 After completing his initial training he was stationed at Ft. Bragg, NC for the first five years of his career. He served in two different companies in 2/504 PIR as a rifleman, machine gunner, RTO, reconnaissance scout, sniper, sniper team leader, and reconnaissance team leader. He participated in Operation Just Cause in the country of Panama from December 1989 to February 1990 and Operation Desert Shield/Desert Storm in Saudi Arabia and Iraq from August 1990 to April 1991. In August of 1994 he was selected to be a recruiter in the Los Angeles Recruiting Battalion where he served three years. Upon completion of recruiter duty he returned to Ft. Bragg and served as a squad leader and the S-3 Air for 2/504 PIR. In December of 1999 First Sergeant Harmon was assigned to 5th Ranger Training Battalion as a Ranger Instructor. He served as a Ranger Instructor and as a Platoon Sergeant. In January of 2003 he was moved to 3/187 “Iron” Rakkasans, 101st Airborne, as a platoon sergeant. While in 3/187 he served as a platoon sergeant and as the Battalion Operations Sergeant Major. He deployed to Operation Iraqi Freedom from February 2003 to February 2004. After his tour in the 101st ABN he was stationed at Ft. Benning, GA as a Ranger Instructor. He served at 4th Ranger Training Battalion as a Ranger Instructor, Dive Locker NCOIC, and First Sergeant from August 2004 to June 2008. His final assignment was at Ft. Richardson, Alaska where he served as the HHD, United States Army Alaska First Sergeant. He retired from the Army in August 2010.